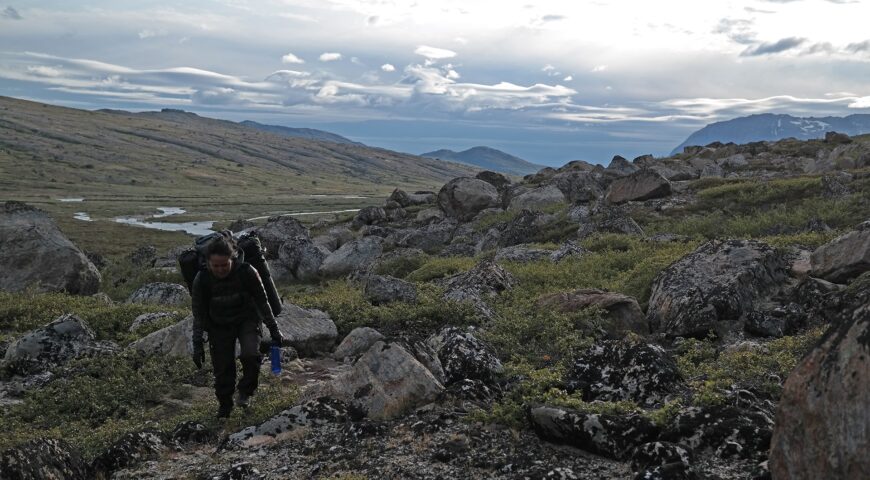 Hiking Through Valleys, Mountains and Rivers from Tasermiut Fjord to Aappilattoq

We went on an exploration trip starting from a sheep farm in Tasermiut called Nuugaarsuk. Nuugaarsuk is surrounded by beautiful majestic mountains, just a 15 minute walk away from the powerful big river of Kuussuaq with its Arctic chars.

Qaqqatsiaq, the 500 meter mountain is right above Nuugaarsuk and has one of the best viewing points of Tasermiut. We made sure to take great pictures from the top.

We started the hike the day after. Starting from Nuugaarsuk to Tasiusaq after breakfast on a very beautiful morning, a 9 kilometers long hike following the road made by the sheep farmers.

Tasiusaq is the only settlement in Tasermiut with its 25-35 inhabitants. Tasiusaq means “Looks like a lake” which is true, since the sea surrounding the village looks like one. We spend an hour in Tasiusaq, ate lunch, walked around in the village greeting the villagers, took pictures and then continued our hike.

We passed by another sheep farm on our way to Itillersuaq. The sheep farm is called Saputit. We took a small break in Saputit to take pictures and enjoy the view with another round of beautiful mountains while eating some snacks.

On the road again, we continued the hike following the road to Itillersuaq. We made sure to drink lots of water, we were able to fetch the purest water in the world from the rivers the whole way not worrying about running out of water on the hike.

Itillersuaq meaning: “The Big Valley” in English, is known to be hiked by the locals of Aappilattoq to Tasiusaq especially on bad weather days when they were not able to sail along the coast to the other settlements or to Nanortalik.

There is a river all the way from the start of the valley to the end and both sides of the river have paths. However, the path on the south side is easier since the north side has more up and down hills with couple of rivers coming down from the mountains which are a bit tricky to come across.

Some of the mountains are almost 2 kilometers tall, and they made us feel so small but also so POWERFUL at the same time. Different emotions are to be felt when in touch with nature. These emotions are difficult to explain and are emotions that have to be felt on your own.

Since we took the hike in the end of July we ate some delicious crow- and blueberries every time we had a break right below the high mountains.

After a whole day long of hiking we put up our tent right in the middle of Itillersuaq and took a very deserved rest the whole night in our cozy tent right after tea made of Greenlandic herbs and plants which we collected along the way. We woke up to the falls first snow on the summits of the highest mountains of the valley, which looked so magical. We had breakfast, put down the tent and packed up then continued the last part of the 17 kilometers long valley.

We went on a 15 minutes boat ride from the end of the valley to the charming settlement called Aappilattoq, which is the last civilization on the southwest coast.

We took another boat ride to another beautiful settlement called Narsarmijit through the famous Torsukattak Sound the day after.

We will write more about the settlements and more details about the hike later on, so make sure to follow our blog, we will regularly post articles from our journeys in BEAUTIFUL South Greenland.