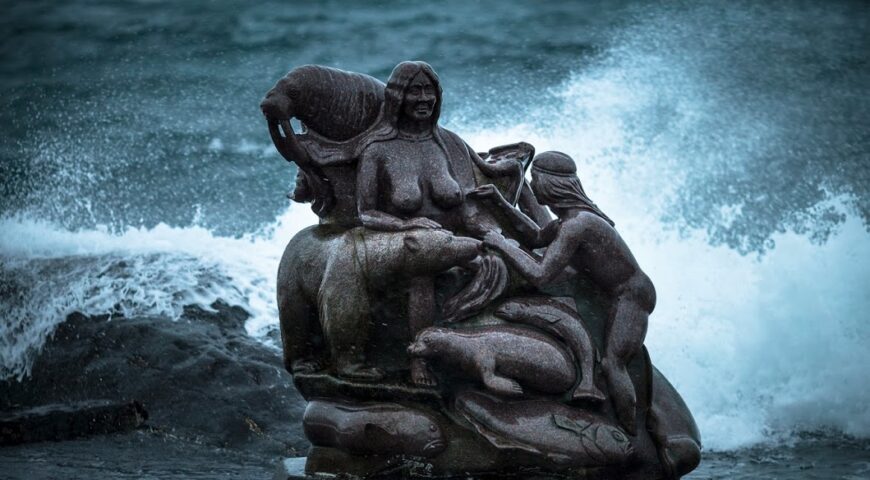 We live in the biggest island on Earth. We call it Kalaallit Nunaat, meaning; “The land of the people”.

It is not the most gentle, especially during the cold winters. Our ancestors followed the prey. In spring, they go out to the coasts of Greenland, hunting sea mammals. In late summers, they go in to the inner parts of the land to hunt the caribou and musk oxen and other land mammals.

They hunt as much as they could during the summers, so they could have food during the winters. They would dry many of their catch so they could last till winter, that is why our traditional food is mostly based on different kinds of dried meat.

Bad hunting summer will turn into a bad winter, a struggling winter.

Our ancestors respected the land they lived in, they believed in SILA, meaning; the weather or the air. They believed that everything such as rocks and flowers had spirits.

Most of all they believed in Angakkoq, the shamans, Tupilak, the spirit helpers of the shamans and  Sassuma Arnaa, the mother of the sea.

If they experience a bad hunting season with no catch, they would know that the people were being punished by Sassuma arnaa for not respecting the land and the sea by polluting it or if they didn’t take advantage of every parts of the catch they have caught.

The pollution would get her hair messy and the animals will get caught in her hair, letting the people out of animals they could hunt.

When that happened, the shaman would prepare to go to meet The Mother of The Sea and ask for forgiveness.

Angakkoq, the shaman would sit down on the grown his hands tied on the back, with his legs stretch out, his front upper body reaching his knees by a rope tied around his legs and his back and then the Angakkoq would go into trance.

While Angakkoq is in trance his spirit would then travel down to the deepest part of the ocean and search for The Mother of The Sea.

On his search for her, he would meet obstacles such as meeting the guardian dogs of The Mother of The Sea. Angakkoq’s spirit helpers would help him and he’d continue.

When the Angakkoq finally finds The Mother of The Sea, he would beg her for forgiveness.

He would ask her to help her comb her hair, she would say no, but the Angakkoq would not take a no for an answer and try to comb her hair, The Mother of The Sea would then take him and drown him away, until she finally forgives him and his people for have had polluted her home.

The shaman would tell The Mother of The Sea that they would take care of the land and the sea and she would set the animals free again for the people to hunt and survive.

Every Greenlandic kid have heard this story once or twice when they were children. It has a clear and an important message to it. We should respect the land we live in and be more aware of what could happen if we keep polluting our surroundings.

Few days ago, on Sunday the 25th of August, we from Tasermiut Camp, arranged a cleaning day by asking the locals to help us clean and collect trash here in our beloved town of Nanortalik.

We asked the municipality to help us and they gave us and the volunteers cleaning cloves and equipment to collect the trash.

We also asked the supermarket Brugseni of Nanortalik, and they gave us beverages for the volunteers and they barbecued outside Brugseni for everybody who helped.

And we are planning on doing it again as long as it is a problem in this town. It is everybody’s responsibility to keep our planet safe and healthy for its creatures.